Joan Donaldson-Yarmey likes to travel and began her career with seven travel books, the research for which took her throughout Alberta, B.C., the Yukon, and Alaska. She switched to fiction and has written nine books: three mystery novels, Illegally Dead, The Only Shadow In The House, and Whistler's Murder in a boxed set called the Travelling Detective Series; Gold Fever her stand alone novel which combines mystery with a little romance; West to the Bay and West to Grande Portage, the first two novels in her Canadian Historical series for young adults; Crazy Cat Kid, a contemporary story for young adults; and The Criminal Streak and Betrayed the two sci-fi books in her Cry of the Guilty-Silence of the Innocent series.
Joan lives on a small acreage with her husband in the Alberni Valley on Vancouver Island. When she is not writing she is picking fruit or playing with her three cats. 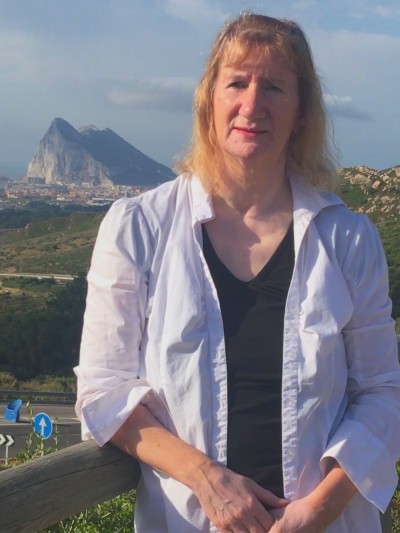 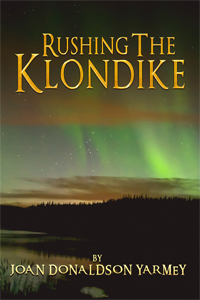 Pearl has been unlucky in love. She fell in love with a man named Joseph Ladue, the founder of Dawson City, but he loved another woman and returned to his fiancée in New York in 1897. Another man, Paul Gamon, has expressed his desire to court Pearl, but Pearl wishes only to be friends with him.

Pearl’s best friend, Florence, and her older brother, Andrew, cross the Chilkoot Trail and arrive in Dawson in search for gold. Pearl remembers Andrew as the scrawny boy who threw snakes and spiders at her and Florence when they were children. She is taken by the handsome man he has become.

Andrew’s first desire is to stake a gold claim after such a long, hard trip. He feels a growing attraction for Pearl but must decide whether he wants to win her hand or follow his dream. 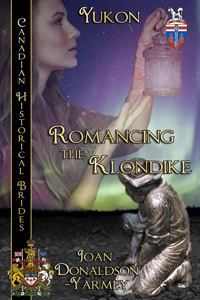 It is 1896 and nineteen-year-old Pearl Owens wants adventure just like her idols Anna Leonowens and Annie “Londonderry” Choen Kopchovsky. In the 1860s, Anna Leonowens taught the wives, concubines, and children of the King of Siam, while during the years 1894-1895, Annie “Londonderry” Choen Kopchovsky became the first woman to travel around the world on a bicycle. She was testing a woman’s ability to look after herself.

To fulfill her dream Pearl is on her to the Yukon River area with her cousin, Emma, to write articles and do illustrations about the woman and men who are looking for gold in the far north.

Sam Owens, Pearl’s cousin and Emma’s brother, has been searching for gold with two friends, Gordon and Donald, for five years without success. Gordon and Donald have decided their quest is futile and it is time to return home. But Sam wants to stay a while longer. Then they hear word of a new gold find on Rabbit Creek.

Over the next ten months, the lives of all five are changed due to love, gold, and tragedy. 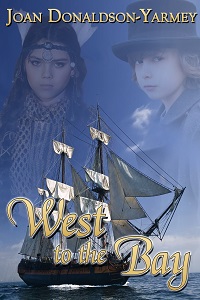 750, Thomas Gunn, along with three friends, join the Hudson's Bay Company and sail from Stromness on the Orkney Islands of northern Scotland to York Factory fort on Hudson's Bay. They believe they are starting a new and exciting life in what is called Rupert's Land, but tragedy follows them, striking for the first time on the ship. At the fort Thomas finds his older brother, Edward.. 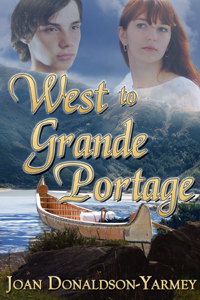 On his sixteenth birthday Phillipe Chabot is told that his brother-in-law has hired him to be a voyageur. He will be paddling west from Montreal to Grade Portage to trade supplies with the Indians for furs. He is overjoyed and receives all the appropriate clothing from his family as birthday gifts, even a tobacco pouch.

As the loaded canoe brigade gets ready to leave, his cousin, Jeanne, accepts the proposal of marriage yelled at her by the clerk who is going along to keep track of the trading.

Unfortunately, disaster strikes the brigade as the men paddle the rivers, make their portages, and get onto the sometimes violent and unforgiving Lake Superior. In Montreal, the city is ravished by a fire and death is everywhere. 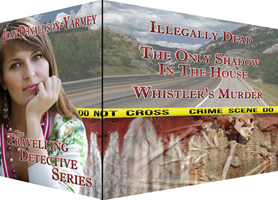 Elizabeth Oliver is a travel writer who somehow gets drawn into a mystery each time she is researching an article for a travel magazine.

Illegally Dead: Elizabeth happens upon the discovery of a skeleton in an old septic tank. Although she tells herself she doesn't have time to get involved, it isn't long before she is digging up long-buried secrets. When a second murder victim is found, Elizabeth's travel research provides clues to the disturbing truth behind the murders.

The Only Shadow In The House: In this fast paced sequel to Illegally Dead, Edmonton travel writer Elizabeth Oliver is excited to get back on the open road to research a new article when, suddenly, an unexpected romance leads to a new murder mystery. Though she is determined to stay focused on her writing, Elizabeth can't ignore the familiar goose bumps she feels when handsome wheelchair basketball coach asks for her help to find out the truth about his mother's death.

Whistler's Murder: Elizabeth Oliver has tagged along with her best friend Sally Matthews to Whistler where Sally is attending a science fiction/fantasy writing retreat.

Elizabeth plans on spending the first week working on an article about Whistler for a travel magazine and then relaxing and enjoying being in the famous resort town for the second week. However, her well laid plan immediately begins to fall apart with the discovery of a body in a newly demolished house. Then she is again sidetracked when one of Sally’s fellow students asks her to solve the mystery of her cousin’s death and is then murdered herself.

"I like how author Joan Donaldson-Yarmey sets her books in obscure places in Alberta. This time it is Redwater...a small town outside of Edmonton that not many people have heard of...I only have because the company I worked at for many years built a cogeneration plant there. This is the second book in her Travelling Detective Series. It is an enjoyable read particularly if you want to learn more about Alberta. The author is a travel writer and her experience and expertise about the area shines through." Kathryn Poulin of Mysteries Etc