Gail Roughton is a native of small town Georgia whose Deep South heritage features prominently in much of her work. She’s a retired paralegal who lived in a law office for over forty years, during which time she raised three children and quite a few attorneys. She kept herself more or less sane by writing novels and tossing the completed manuscripts into her closet, most of which have now emerged in published form. A cross-genre writer, her books range from humor to romance to thriller to horror and she’s never quite sure what to expect when she sits down at the keyboard. Now multi-published by Books We Love, her credits include the War-N-Wit, Inc. series, The Color of Seven, Vanished, and Country Justice. She usually has a project or two on the backburner but doesn't discuss any for fear of jinxing them. Given her affinity for the supernatural, this should come as no surprise to any reader. 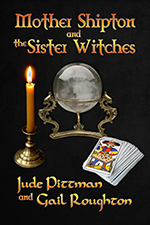 The Shipton history is complicated. Some families have a guardian angel.

The Shiptons have a guardian ancestor who whizzes through the centuries and jumps right in whenever one of her girls is in trouble. All the girls have power and they’re watched over by elder sister Lillian, who takes her job as family trouble shooter seriously.

There’s no shortage of trouble to be sorted out either and even with their own powers each of the girls needs help. First Katherine's oilman fiancé disappears in the Gulf of Mexico, and then Irene's world champion saddle bronc rider fiancé is sabotaged and in danger of being trampled by a bucking bronco.

The spider-web of trouble stretching between these three modern sister witches might be too much for even a time-traveling guardian angel to handle on her own. 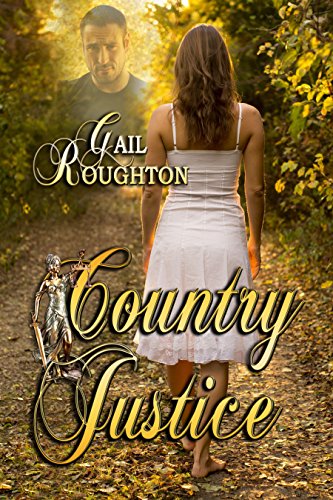 What goes around comes around. That’s justice. Especially in small towns where everybody knows how many eggs you ate for breakfast before you've even left the Scales of Justice Café. Funny thing, though. Usually what everybody thinks they know—they really don’t. Take the folks in Turkey Creek. Oh, everybody knows Maggie Kincaid doesn’t speak to her father. They think they know why. But they don’t. They know Billy Brayton died twenty-five years back. Too bad nobody told him. Because now he’s home. And it’s time to right some past wrongs. Time for justice. Country Justice.

“One of the best books I’ve ever read and I read about 100 or more a year. I loved the characters from the very beginning and was sorry when the story ended. I’m ready for the sequel—hint, hint.” ~ Amazon Reader tvlgds

“I’ve never been to Georgia—and that’s my loss. But Country Justice took me close. Real close. So some inside and meet some new good friends—and some bad ol’ boys. Because there’s a gray Mustang doing lickety-split over the hill. Because a dead man’s coming home—and Turkey Creek doesn’t know what’s about to hit it.” ~ Author Graeme Smith 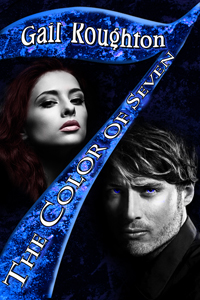 Deep in the woods that slide off into Stone Creek Swamp, teenage drug dealers retrieve their stash and receive an unexpected dividend—the unwitting resurrection of Cain, powerful Bokor of Black Magic. Atop Coleman Hill, two young attorneys renovate a decrepit relic of a house for their home and office. A house with a past it wants to share, showing Ria Knight tantalizing scenes of its original owner, Dr. Paul Devlin. Dr. Devlin’s not exactly alive and well, but he’s not dead either. With Cain’s resurrection, the battle between the two first begun in 1888 rages again. Because the past, like evil, never dies. It just—waits.

5.0 out of 5 stars  Bone Chilling and Heart Warming All at Once

I've become a fan of Ms. Roughton. She's an excellent writer, and I've loved every one of her books. This is her masterpiece. All of Ms. Roughton's character's are finely drawn, sucking the reader into their lives, but these people exist in different worlds--different times. Ms. Roughton takes us on a journey from Macon, Georgia in the late 1800s to the present and back again, ending up... Yeah--ya have to read the book/s to find out. I suggest reading them together as one book, which is how Ms. Roughton wrote the manuscript. Her editor thought it was too long to be one book. She apparently didn't read the last few Harry Potter books in pretty much one sitting, which I tried to do. Not being a page-at-a glance reader, the final one took me about thirty-six hours and included a nap, which I took rather grudgingly with the book in my lap. I don't have the stamina I did when I was a kid. But, I digress.

Cain will chill your blood. "My name be Cain. My color be sebben."
And Paul and Ria will warm your heart. But not unless you buy this amazing book 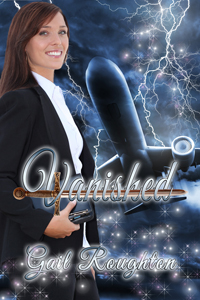 Tess Ames thought this trip was just business as usual. Well, other than the added perk of a few days in Jamaica after the conclusion of business. Then the fog rolled in. And Tess's world changed forever. In more ways than one.

Adventure, Romance, and Humor... with a twist

Wow! From the characters to the setting to the surprise twist, this book had me hooked from the first page.

Tess is a fantastic main character. Despite the bizarre situation she finds herself in, she does her best to meet it with grace and humor. That is, when she’s not being stubborn as a mule. I loved this strong, independent heroine. And the leading man – oh my! He’s about as swoon-worthy as they come. But, like Tess, he’s not without his faults, adding dimension to his character. And that’s not all; the supporting characters are as well-rounded and believable as the main characters.

I absolutely adored the setting of Trusca. The author created a fascinating, believable alternate world that draws you in and makes you want to learn all there is to know. The bits of Truscan language thrown in were just enough to give the world even greater depth without breaking the flow of the story.

As for the surprise twist… well, I don’t want to give any spoilers. Let’s just say it really did take me by surprise, something that doesn’t often happen.

Having devoured Vanished in record time, I’m anxious to check out more from this talented author.

Ariel Anson thinks she has her life in order. She’s young, smart, and beautiful, even if she doesn’t believe the beautiful part. She’s a paralegal with a great career and a fiancé who’s a CPA. You just can’t get any steadier than that.

Then she meets private investigator, bounty hunter, process server Chad Garrett. What does War-N-Wit, Inc. stand for anyway? Warlock and Witch? For real? Oh, yes! For real. Her life as she knows it is over!

Review:  First Sentence: No lightning bolt streaked from the sky the day my life as I knew it began to end.

Ariel Anson, paralegal, works for a group of lawyers. She has a stable, but boring relationship with CPA, Scott Newton. They're engaged.

Chad Garrett, warlock, bounty hunter and PI - among other things, whips into Ariel's life much like an accident meant to happen.

Reincarnation, witches, warlocks, ghost whisperers - you name it, magic is everywhere in this story.
What will Ariel do, stick it out with organized, safe, Scott or take a ride on the wild-side with Magic Man, Chad:) If Stacey, her sister, has anything to say about it, things are about to change.

The fast paced story and Ariel's first person POV voice kept me turning pages. I want so badly to describe a few of the scenes, but it would certainly spoil your anticipation as you read for the joy, the adventure, and of course for the romance of it.

Loved the ending, although it left me hanging in one respect, ONLY because I want more, what does Ariel get herself into next? How long do I have to wait? It's a great, fun romance. Looking forward to reading more from Ms Roughton.

Not everyone can join, just the elite few who remember their past lives. Only the Seer knows if those memories are truth or fabrication. There’s just one problem. The new Seer is missing in action.

War-N-Wit’s new assignment is a blast from the past! But whose past?

Review
Chad and Ariel Garrett held me spellbound in the first of the War N Wit series, The Witch. There's never a dull moment with those two around. Throw in a cunning con artist/evil figure from the past and Ms Roughton does it again. In Resurrection, their adventure continues. A must read. (Romance Writer Roseanne Dowell)

Daytona Bike Week. Biker’s paradise. The perfect place for Chad and Ariel Garrett to take a few days off and relax with Chad’s buddy Spike and Ariel’s little sister Stacy. But nothing ever goes as planned with that magical duo. Trouble just stalks them like a black cat. Maybe because a black cat is stalking them. A missing agent riding with an outlaw biker gang, a call from Chad’s past, and War-N-Wit, Inc.’s riding again. On Harleys!

Gail Roughton gives us Book Three in her engaging War -N-Wit, Inc. Series, with THE COVEN.

I love sassy heroines with lots of attitude. In this third journey into the world of Warlock and Witch, Inc. Ms. Roughton gives us two heroines with tons of 'tude and several adventures, each packed with magic, laughter, and tons of merry making.

We followed Ariel's antics as a newly discovered witch of power...and yes, that definitely would disrupt your allegedly staid world, through both books one and two...but in book three she is joined for a rollicking adventure not just by her Warlock hubby, Magic Man, but also by her ghost whispering sister Antsypants.

I'm not going to give the story away, except to say I never laughed as much while also biting my fingernails. Ms. Roughton knows how to give suspense that leaves your sides splitting at the same time.

Therefore, and without a single qualm, I award War-N-Wit THE COVEN FIVE STARS. If you have not gotten your hands on this series yet, you really are missing a snootful of scary laughs.

Well Done Ms. Roughton. I look forward to reading more of your work.

Another wedding day dawns for the ever-growing Garrett-Forrester Coven as Spike and Stacy get ready to say “I do”! Don’t expect weddings bells and white gowns, though. It’s off to the Drive-Thru Tunnel of Love at the Little White Wedding Chapel in Vegas. Again. It’s sort of a family tradition.

But what’s supposed to happen in Vegas just refuses to stay in Vegas. And you’re not going to believe this side-trip!

I love the Garret-Forrester Coven, and Gail Roughton is a good enough writer to keep a series fresh, so the reader stays engaged. "War-N-Wit, Inc.—Mean Street, LLC" does not disappoint. When Stacey’s sister Ariel met Chad’s brother Spike, it was love at first site and they knew they’d have a marriage made in …somewhere. They invite Stacey and Ariel’s parents to the wedding, knowing what a shock the whole thing will be for their gently-bred Southern mom. Grace Anson always envisioned either church or garden weddings for her daughters, with flowing white gowns, flowers, ribbons, and crystal flutes of champagne afterward either still in the garden or a very nice hotel—not a drive-thru wedding, and certainly not on the conveyances her daughters have in mind.

But, the girls are not the only ones having family problems. War ’n’ Wit, Inc. often works for a concern called “Mean Street, LLC,” a family-owned company run by a man named Gabe Smith. He calls Chad and asks him and Stacey to, “Check out a magic act on the Strip. No big deal.” Gabe and his brothers Mike and Raph are having problems with their brother “Lucy” (a childhood nickname he hates), and it turns out to be a very big deal. Good thing Stacey’s cat, Micah has managed to “follow her” to Vegas—again.”