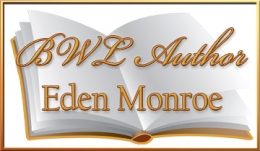 Eden Monroe loves giving voice to the endless parade of interesting characters that introduce themselves in her imagination. She writes about real life, real issues and struggles, and triumphing against all odds. A proud east coast Canadian, she enjoys a variety of outdoor activities, her cat, and a good book.  Find Eden on Facebook at 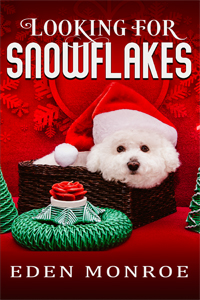 Two days before Christmas the unthinkable happens when Snowflakes, the adorable toy poodle, is stolen from Cole Donahue’s pick-up truck in a supermarket parking lot.

Dog sitting for his soon to be ex-wife, Elsa Randolph, when the theft took place, Cole and Elsa temporarily set their differences aside and immediately begin their search with a poster and social media blitz.

Meanwhile, Snowflakes, forced to rely on the kindness of strangers, experiences her fair share of holiday season adventures. She even makes friends with Mr. Christmas himself.

Working together to find the missing poodle, will Cole and Elsa rekindle their love despite the seemingly insurmountable challenges that caused their break up? Will Snowflakes be reunited with her family in time for Christmas? 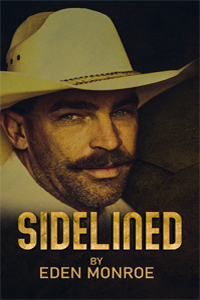 In the space of eight seconds Tate McQuaid’s rodeo career was over. A superstar in one of the most dangerous extreme sports on the planet, his journey back begins after waking up from a coma.

There’s a lot to be made right from his reckless lifestyle, both inside and outside of the arena, and that includes reconciling with his ex-wife, Erica, although she’s now married to another man and wants nothing more to do with him.

Never afraid of a challenge, he intends to win her back despite the fact that the odds are stacked against him. But Tate doesn’t know any other way than to saddle up and tackle whatever needs tackling, head on, and hope he’s still standing when the dust settles.

Birch Shadow is a sumptuous mountain getaway, an idyllic cottage with way too many secrets to keep, like its owner, business tycoon and philanthropist, Shaw Garland. No one knows his dark side like the guests who visit Birch Shadow, including Rhone Alexander who sought the spectacular retreat for some much-needed R&R following the end of a difficult marriage. Worse waited.

Grace Upton is an up and coming interior decorator unwittingly drawn into the treacherous Birch Shadow game.

Will anyone survive Birch Shadow long enough to make their dangerous getaway?

allaghan is a man on a mission. Released from prison for a crime he did not commit, he is once again a free man, his overly-strict parole officer notwithstanding, and determined to clear his name.

However his small, idyllic hometown has not forgotten or forgiven, and his return there sets off a chain of events that push Blaise to the edge of his endurance.

Can he win back the trust and love of Sophie McDaniels, the woman he loves, or will she keep her wedding date with another man?

Can his mother continue to live with what she’s done?

Who will survive this tangled web of deceit and lies? 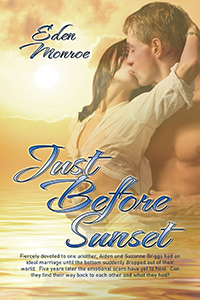 Aiden Briggs is a hunk, there’s just no other way to say it. Tall, well-muscled and ruggedly handsome, his work as a civil engineer routinely takes him to untamed corners of the globe. His wife, Suzanne, is a quiet beauty, dark-haired and doe-eyed, and a gifted water colourist. Fiercely devoted to one another, theirs was an ideal marriage until the bottom suddenly dropped out of their world.

After five years, the emotional scars from that life-changing ordeal have yet to heal. And now each of them face their own personal trauma, struggling to come to grips with the unthinkable.

Will Suzanne survive her crisis? Can Aiden find his way back home, or will the detour forced upon him be his last? 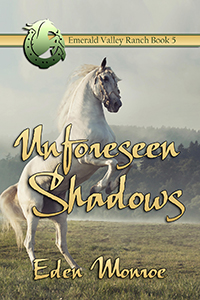 Kane Davidson continues to oversee his Emerald Valley Ranch with pride. A supreme alpha male in his prime, it feels good to hit his stride, his happiness now complete, despite unforeseen shadows….

A friend in need takes both Kane and Martin Parker to the edge, a dark time of forbidden indulgence and bitter consequence.

The grim reaper raises his ugly head. Will he be denied again?

“Another Winner from novelist Eden Monroe. Settle in for a great read! Monroe just gets better and better.” Joan Hall Hovey, author of The Deepest Dark. 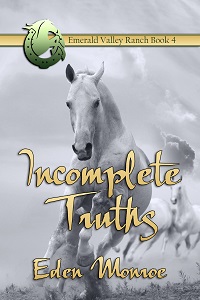 One unexpected phone call and Kane Davidson’s past is laid before him in agonizing detail of life or death. There is no question as to what his decision will be, and Jessica is by his side as he prepares to undergo major surgery. While Kane is in the operating room, a frantic call comes about his beloved mother and time is of the essence, although Kane cannot be told about her condition until he is stronger. Doctor’s orders. When he has recovered enough to be told the truth, will it be too late?

Martin and Lindy Parker are also edge of seat when their sixteen year-old son, Jason, finds first love with the precocious Keely Taylor, with explosive results. Will they find him in time?

Spring blossoms into a glorious summer; Savero Gold is still king of Emerald Valley as the ranch realizes even greater success, but for Kane, something is now missing. Incomplete.

Sometimes the truth can set you free, and sometimes it must go to a quiet place … and wait. 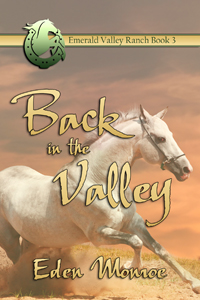 After winter makes its final stand with a ferocious March blizzard, Emerald Valley begins to warm with the promise of spring – and a new crop of Savero Gold foals is eagerly awaited. It is also a time of great joy for Kane and Jessica as they are welcomed home from the hospital with their own precious newborns.

Bea and Will are welcomed with open arms as well when they leave Bermuda for good and return to the lush rolling hills of the Valley. And to everyone’s surprise and delight, Rowdy and Victoria decide to put Texas in their review mirror and move back home to the Valley to raise their children.

Then the unthinkable happens – every parent’s worst nightmare. A child is abducted and a community in shock gathers to pray. And then another child goes missing….

Back Home in the Valley takes you on a gripping journey of suspense you won’t soon forget. 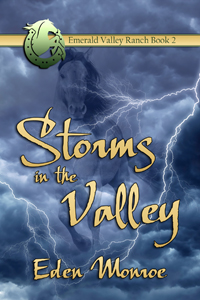 tin Parker is a very happily married man, so when his first love, Diane Branden, blows back

into town – still a force to be reckoned with – he is not prepared for the fallout. Drawn unwittingly into her carefully spun web, upheaval quickly follows as his world immediately begins to skid sideways.

Newlyweds Kane and Jessica Davidson also feel the roll of thunder as storm clouds continue to gather menacingly over Emerald Valley, heralding a season of trial, turbulence and challenges in this suspense-filled emotional drama.

Storms in the Valley is a cautionary tale, a grim reminder that nothing in life should be taken for granted, and to never underestimate the enduring power of love, personal strength – or trust.

With a seven million-dollar stalli 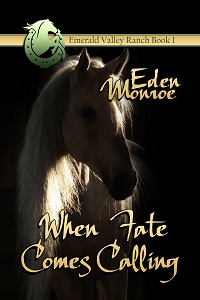 on on the line, Kane Davidson must comply with an upsetting ultimatum – or lose Savero Gold. The much-celebrated foundation stud at the Emerald Valley Quarter Horse Ranch, Savero Gold is vital to its ongoing success. Jessica Templeton knows nothing about ranches – or horses - but the stallion is hers to keep unless Kane agrees.

Fireworks erupt when Kane and Jessica square off about the ownership of Savero Gold, but eventually there are sparks of another kind, plenty of them, when they finally find common ground between them. Then disaster strikes at the ranch, lives hang in the balance and prayers are fervently prayed as the unexpected nightmare continues to unfold. 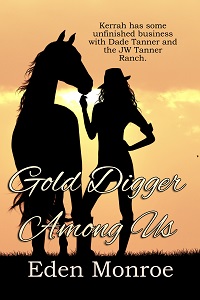 Rancher Dade Tanner and his old flame, Kerrah, have some serious unfinished business between them - a five-year love affair that came to an abrupt halt one terrible night. Now it’s ten years later and she’s back – but the rules have changed, dramatically. She is not welcome on the ranch, accused of an ulterior motive to return since the family patriarch, Buck Tanner’s bout with ill health. Nevertheless she fights to stay in the one place that has ever felt like home.

However the Tanners have locked horns in a power play, and Dade’s older brother, Virgil, is a sinister force that threatens not only Kerrah, but the very future of the JW Tanner Ranch. Who will survive Virgil’s private game of greed and vengeance?

An exciting modern western with impressive ranching details and a great story line. I enjoyed this book a lot and other modern western fans will as well. A great suspense tied up with a great western. Good job.  John Mak 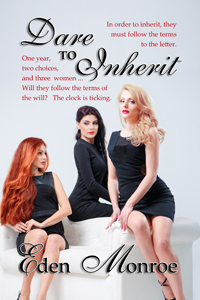 When Feenia Brooks dies suddenly of a heart attack, her three estranged nieces are shocked to discover that their elderly aunt was actually worth millions, the money earned through shrewd investment of Feenia’s own familial inheritance.

Feenia and her husband, Delmar, had taken the girls in when their parents were killed in an automobile accident, although Jocelyn, Chloe and Willow had never been happy in their home – relieved when they were finally able to escape their clutches.

It was following the funeral that Jocelyn, Chloe and Willow attended the reading of the will, the final venomous wishes of the deceased having been previously videotaped for their benefit. In order to inherit, Jocelyn and Chloe must obey Aunt Feenie’s instructions to the letter, making lifestyle changes as stipulated – and all within just one year!

Can Jocelyn sober up – and stay that way, despite repeated failure to do so in the past? Can she win back her estranged husband as required? Any mention to him of what’s at stake would immediately disqualify her from inheriting.

Can Chloe, a bona fide city girl, convince Feenie’s choice of husband for her, an Alberta cowboy dead set against marriage, to walk down the aisle - without his knowledge of what’s on the line? If he finds out prior to the anticipated nuptials, she gets nothing.

What will become of Willow, disinherited solely because of the man she married? Can she save her troubled marriage and make peace with the loss of millions?

One year, two choices and three women will tell the tale – and the clock is ticking….