About the Author: Jan Drabek was born in Prague and spent the war there, with his father, a member of the Czech underground surviving Auschwitz to serve as the chief prosecutor at several trials of Nazi war criminals. In 1948, when he was a teenager, Jan’s family escaped on skis from the newly Communist Czechoslovakia, eventually making their way to the United States where he finished his schooling and served in the U.S. Navy. He has called various countries in North America, Europe, Asia and Africa his home while working as a taxi driver, refugee resettlement officer, high school teacher, radio broadcaster, an ambassador and chief of diplomatic protocol. Married with two daughters, he is the author of more than 20 books, both in English and Czech. He has conducted seminars on memoir and biography writing and has served on the board of The Writers’ Union of Canada, also three terms as President of the Federation of British Columbia Writers. He lives in Vancouver. 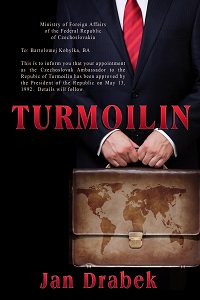 Turmoilin is a satire on many levels – it deals with the post-Communist world, Africa, diplomacy, but above all with human relationships. A North  American umbrella salesman with Czech roots returns to Prague to teach English at the Czech Ministry of Foreign Affairs and finds himself appointed Ambassador of the Czech Republic to an African country called Turmoilin. Accompanying him to his new post is his glib wife Ginny, who helps him out of numerous scrapes. Along the way, our hero must deal with many problems, such as his inability to grasp the fundamentals of the secret code and the strange ways of his mysterious neighbors. Among the characters he meets are the outspoken hard-line conservative black U.S. ambassador to Turmoilin and a senile papal nuncio who keeps mistaking him for a Romanian soil erosion expert. Amongst problems he also must deal with is the separation of his country into The Czech Republic and Slovakia; also with his first secretary who causes a diplomatic incident by copulating in the tall grass of another embassy.